Most visitors begin their journey in the Amur River region with Blagoveshchensk. The capital of the region is located on the border between Russia and China. The city's urban architecture is remarkable: the streets run perpendicular and were designed as a grid, like military cities of Ancient Rome. Many buildings are historical monuments, and look like something from a photograph of the 19th century. The proximity to China also affects the appearance of the city, with noticeable elements in Asian style.

The most popular place with city dwellers and visitors of Blagoveshchensk alike is the embankment, which stretches along the Amur River for several kilometers. It offers magnificent views of the river and the Chinese city of Heihe. In the centre of the embankment stands a three-meter high monument to the founder of the city, Count Nikolay Muravyov-Amursky. A favourite with locals is the rotunda, a gazebo with a transparent dome and marble columns located on the bank of the Amur River. 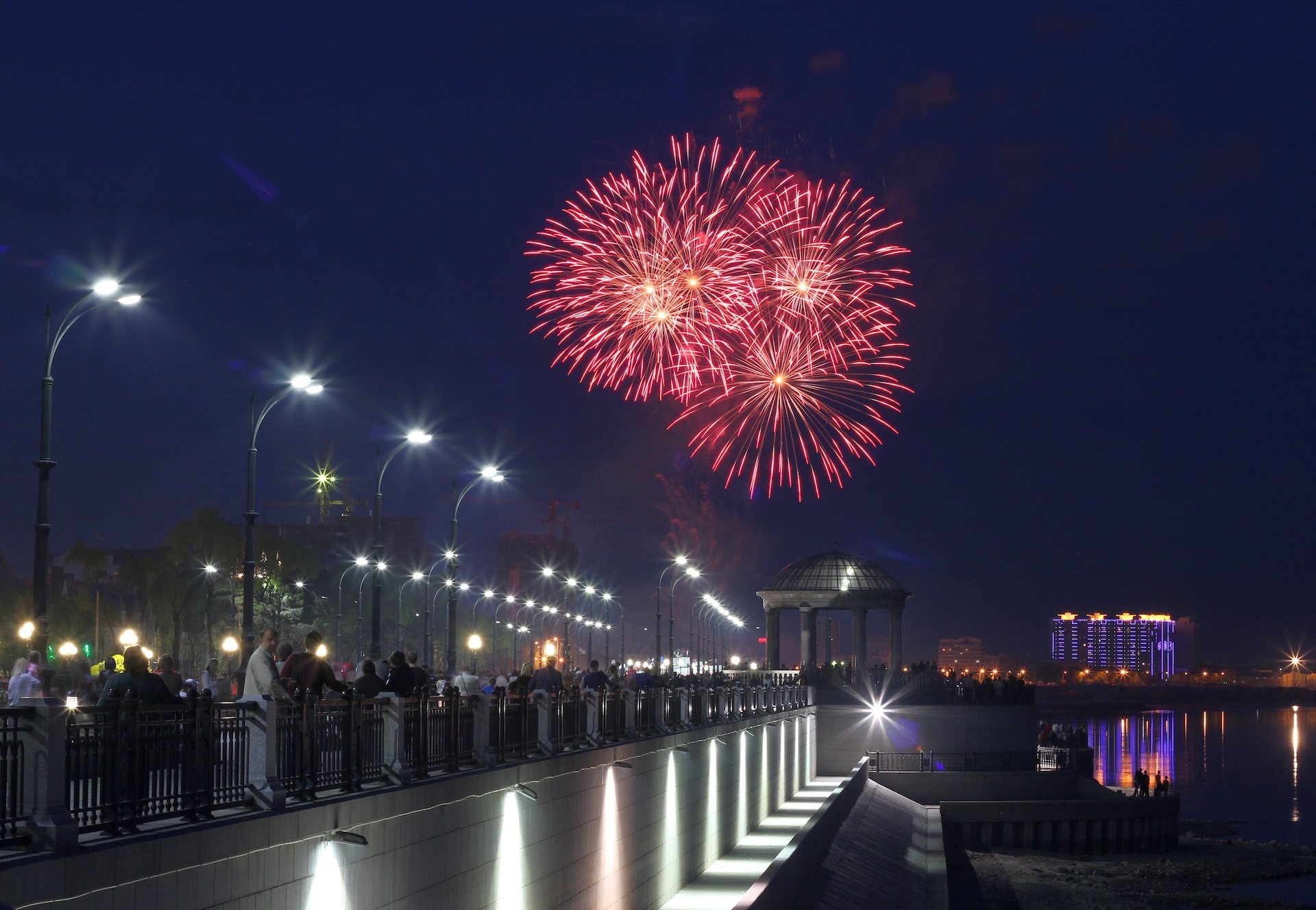 Numerous architectural and sculptural landmarks are located along the embankment, as well as parks, cinemas, and shopping malls. In the evenings, musicians gather here, sometimes an orchestra plays live music, and the city people dance.

One of the main attractions of Blagoveshchensk is the Triumphal Arch, which was erected on the embankment and is a copy of the Tsar Gate. It was built on the Amur banks especially for the visit of the future Emperor Nicholas II on his way home from his overseas trip (the crown prince visited several countries, including Egypt, India and Japan). In the late 1920s, the Arch was damaged during the flood, and in the 1930s, it was completely demolished. It was only in 2005 that the Arch was restored from surviving photographs. 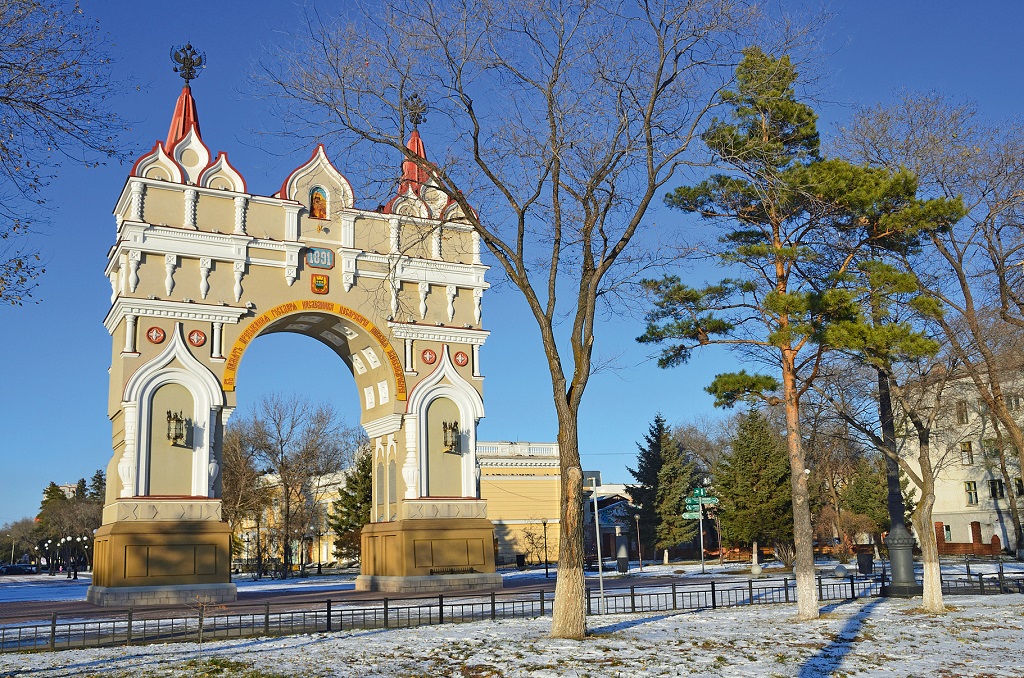 The Arch is a grey structure with shades of pink, reaching a height of 24 metres. The main difference between the new Arch and the previous one is the icon in the centre. Saint Nicholas the Wonderworker was depicted on it last century. Today, the last Russian emperor, Nicholas II, is watching over the Amur River.

In early 20th century, the Mauritania shopping arcade was built on the embankment. At that time, mainly food products were traded here. In Soviet times, the premises served as a river boat station. Nowadays, it is occupied by the Institute of Geology and Nature Management of the Far Eastern Branch of the Russian Academy of Sciences. 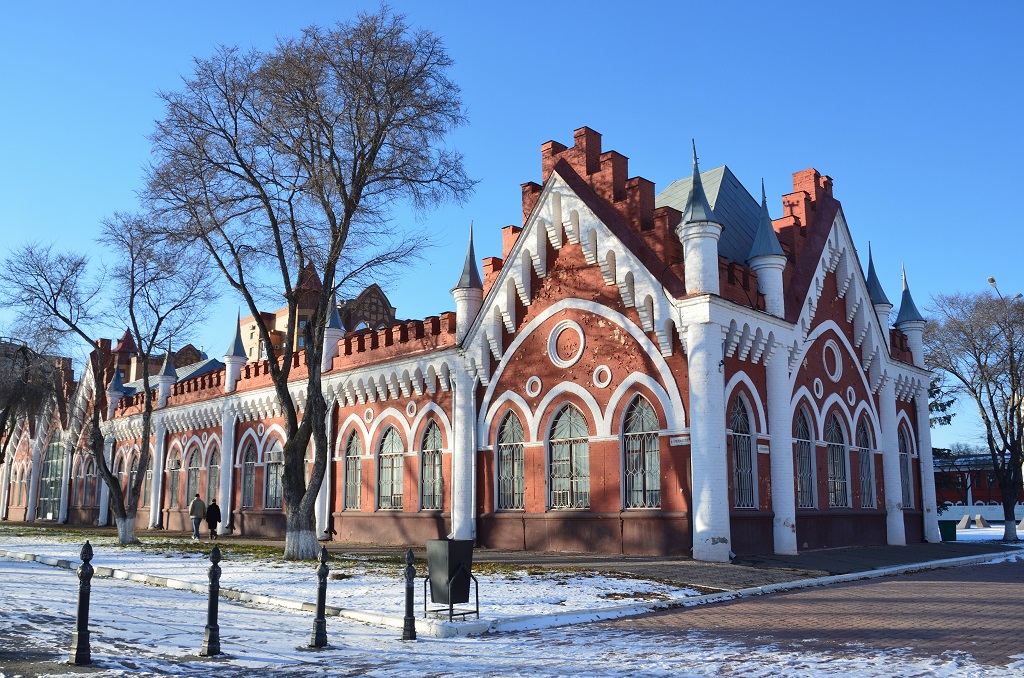 Historians are still wondering why the building was called "Mauritania". According to one version, the reason is the unusual architecture with elements in pseudo-Gothic style, like lancet windows and turrets on the roof. It is also the place visited by writer Anton Chekhov when he came to the city in the 19th century.

The Novikov-Daursky Local History Museum of the Amur Region is located in one of the most beautiful buildings of the city. In late 19th century, this building housed a branch of the Kunst & Albers Trading company. Its founders, the Germans Gustav Albers and Gustav Kunst were traders in the Far East. Today, the collection of the museum contains over 160,000 objects. The archeology, ethnography, and numismatics collections are the most remarkable. Many items are unique: for example, here you can see the Ust-Nyukzhinsky meteorite and costumes of Evenki shamans. 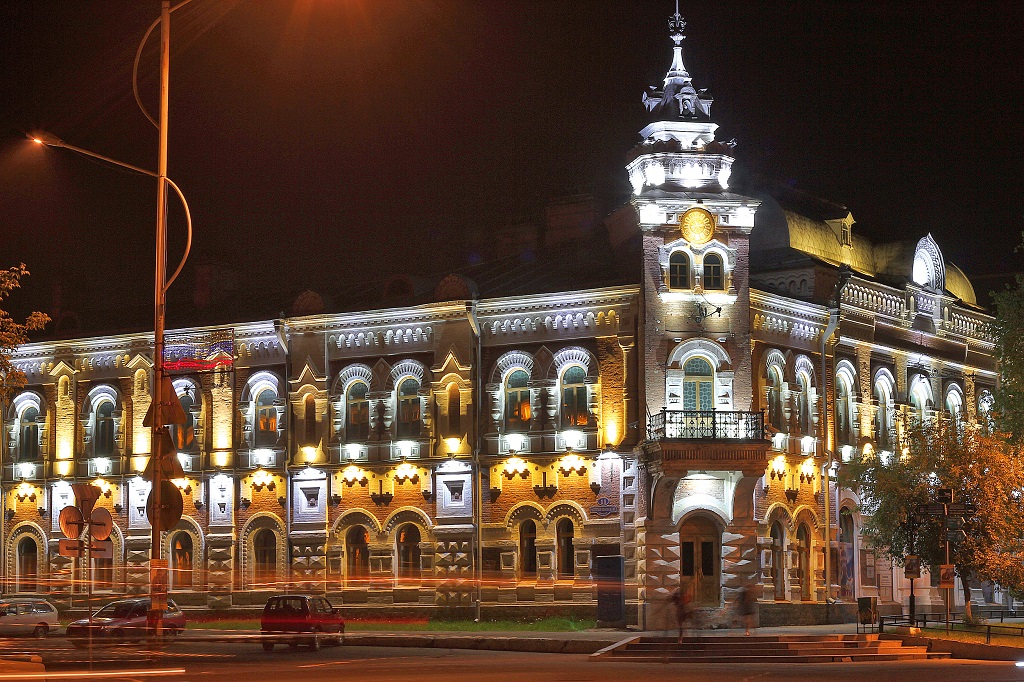 The Cathedral consecrated to the Annunciation of the Blessed Virgin Mary was built in 2002. The oldest church in the city used to stand in that place. However, the old church burned down in the 1920s. Now the cathedral has 7 gilded domes. The bell tower, over 32 meters high, is also crowned with a dome. The main treasure is the Albazin Icon of the Mother of God, which is considered miraculous. According to legend, it appeared in the Amur River region sometime around the the middle of the 17th century.

The statue of Count Muravyov-Amursky and his brother-in-arms, prelate Innocentius is placed next to the cathedral. 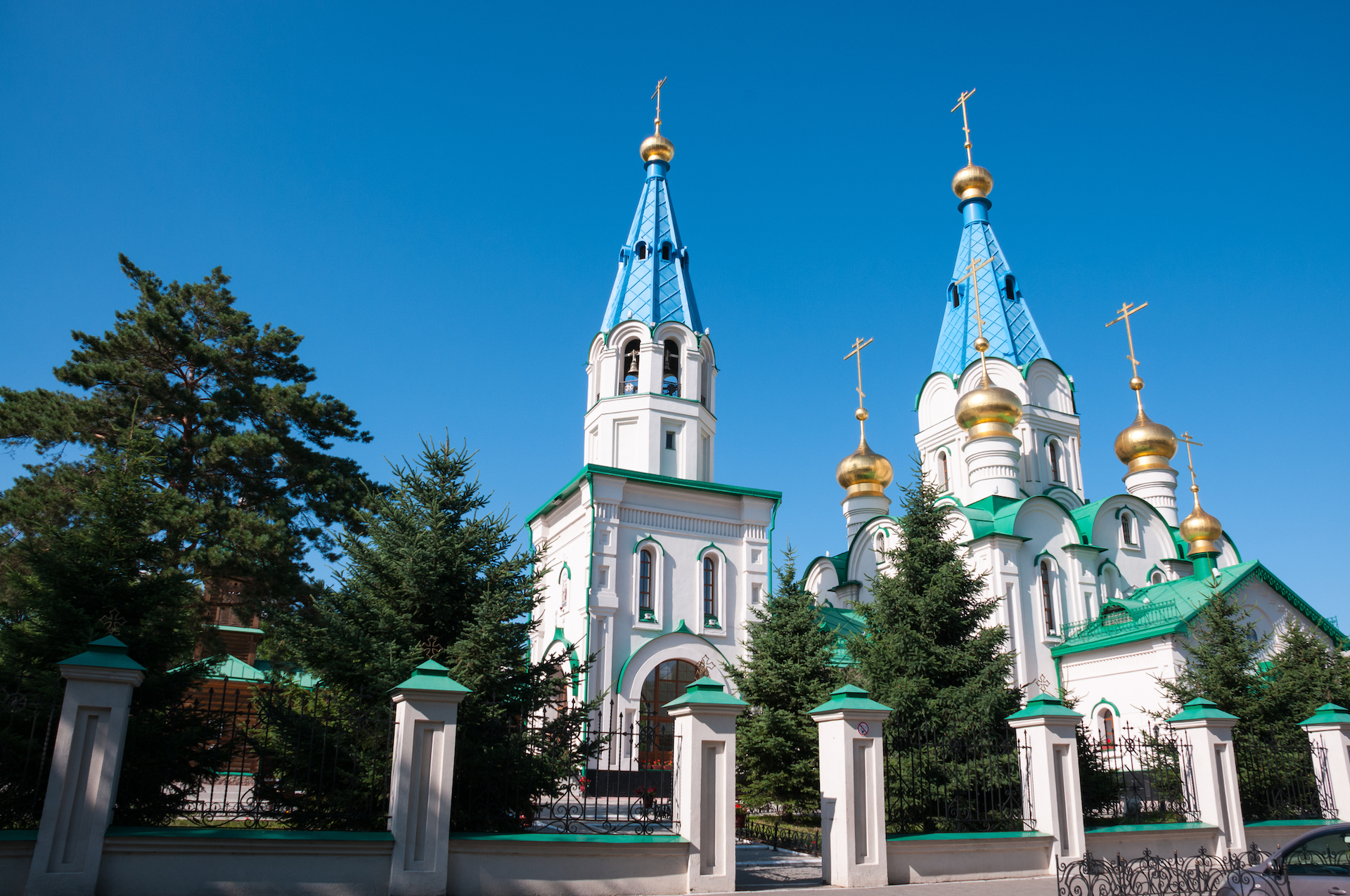 Blagoveshchensk is the only city in Russia with a dinosaur cemetery. Furthermore, new remains of ancient animals continue to be found there. The first unusual finds were discovered in early 20th century. The giant reptiles lived in this area about 65 million years ago. They were some of the last dinosaurs on Earth.

The unique prehistoric herbivore dinosaur found at the Blagoveshchensk Dinosaur Cemetery was named the Amurosaurus.

The Paleontologic Museum in Blagoveshchensk houses the country's largest collection of prehistoric dinosaurs. There you can see genuine bones of Amurosaurus, Kerberosaurus, Olorotitan, and Arkharavia. All of them were found at different times in the Amur region.

Opening hours: Mon – Fri 8 am – 5 pm, tours are organised only by request

There are several war memorials in Blagoveshchensk. The main place dedicated to the commemoration of the heroes who died in the Great Patriotic War (World War II) is the Victory Square. In 1967, a memorial was opened here. The memorial wall features the names of all soldiers from the Amur area who died in the war. In the niche of the obelisk, a capsule is stored containing soil from hero-cities. The Eternal Flame is constantly burning here. There are cannons placed on each side of the Flame.

The Statue of Druzhok

Perhaps the favourite statue among the locals of the Amur area. It is dedicated to a real dog, which became notorious after a serious flood that took place in 2013. Druzhok was left to guard his house in the village of Vladimirovka, Blagoveshchensk district. Its owners were evacuated, leaving the dog with their neighbours, whose house was not yet flooded. But the dog fled back to his home. The loyal friend was found on the doorstep of the house: the brave dog stood upright in the rising water, but did not abandon its station.

Now, the 400-pound bronze dog rests its paws on the parapet of the embankment and peers into the Amur River, guarding the border. Druzhok's nose is polished to a shine: people believe that if you rub it and make a wish, it will come true.

The Train Station was finalised in 1915. Work began in 1908, when the construction work on the Amur Railway started. The railway itself was opened in 1913. The first train circulated from Blagoveshchensk to St. Petersburg. The station building was erected in old Russian architectural style and it looks more like a palace than an administrative building. 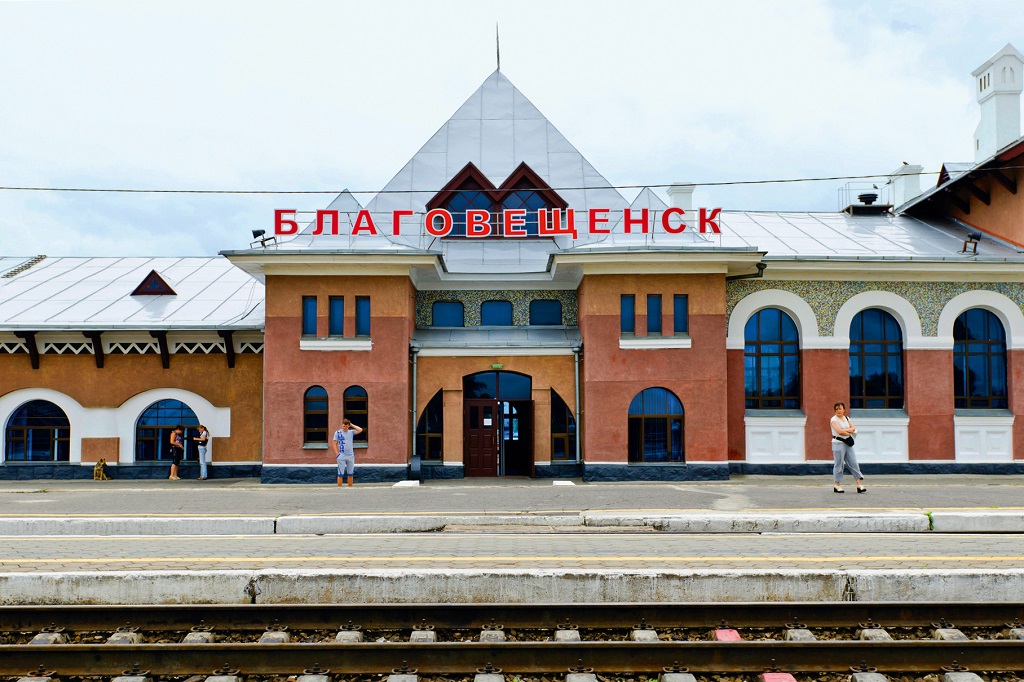 Druzhba (Friendship) Park was inaugurated in Blagoveshchensk in the 1990s. It is intended to emphasize good neighbourly relations with the eastern neighbour, the country of China. Some elements of the Park decorations are made in the Chinese style. The Park has recreation areas, an amusement park for children, and a floating fountain. At the end of the Park, at the crossroads of Kalinin and Institutskaya streets, is where the Church of Blessed Xenia of St. Petersburg is located. 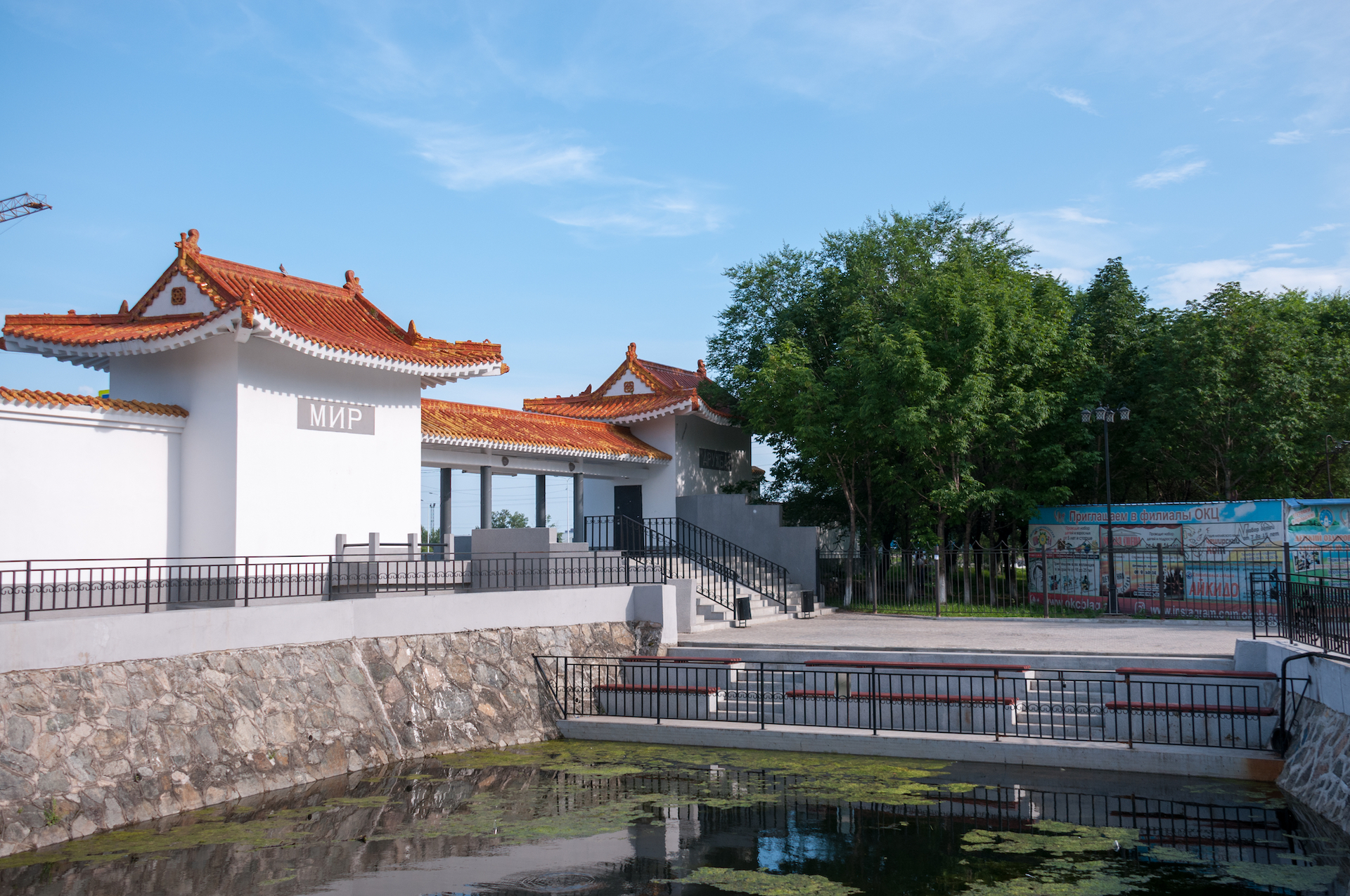